If a giant crate of organic vegetables turns up on your doorstep and you’re in Provence what should you do? Make ratatouille of course. Even if it does seem a little dated or mundane in a world that has moved on from seeing the Mediterranean as exotic, it’s a classic for a reason – it’s the perfect way of using up an oversupply of summer vegetables and, made with a little bit of care and attention (and, most importantly of all, ripe tomatoes) still tastes great. It also just seems right to make it at this time of year.

It’s not as old a dish as you might imagine, however. According to Felicity Cloake, it wasn’t until the 1930s that the French verb touiller, meaning to stir, became associated with a ‘ragout of aubergine with tomatoes, courgettes and sweet pepper’. Larousse Gastronomique says that the different vegetables ‘should be cooked separately, then combined and cooked slowly together until they attain a smooth, creamy consistency’, according to the purists, and I would tend to agree with them – there’s nothing worse than courgettes boiled in a tomatoey soup so that all the vegetables simultaneously taste watery and sharp, with the exception of the aubergine which becomes uniquely bitter and rubbery. But frying the vegetables separately and removing them from the pan in stages seems pretty ridiculous too, and almost seems to go against the spirit of the dish, which really should be simplicity itself, especially when made on a hot, late summer’s day.

I think the best way to emphasise each vegetable’s character is to roast the courgettes, aubergines and peppers (and maybe some cherry tomatoes, if you have them) with some herbs and oil till they’re soft and slightly charred at the edges and then cook them for a good while longer in an already well-reduced and well-oiled onion, garlic and tomato sauce. Then add salt, pepper, olive oil and herbs and serve a little below piping hot. 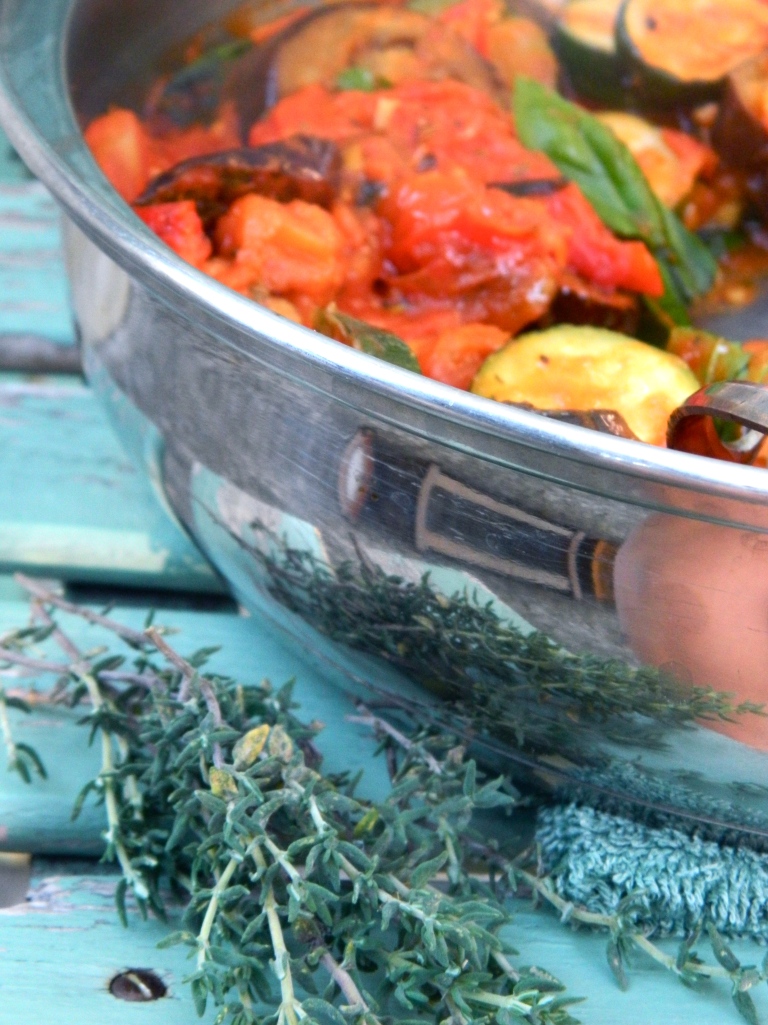 While I haven’t quite followed her recipe, I think Cloake’s insistence on the use of the oven at some stage is key. I also like her advice: ‘Ratatouille requires ripe vegetables, a liberal hand with the olive oil, and patience: only long, slow cooking will give you the creamy soft vegetables, and intense, almost jammy sauce that sings of the sun. Anything else is just plain vegetable stew.’

Slice the courgette, pepper, cherry tomatoes and aubergine and drizzle over a little oil. Season and roast for about 20 minutes, or until everything is soft and slightly charred at the edges. Meanwhile, dice the onions and fry in a generous amount of butter over a very low heat until soft and golden. Prick the tomato skin and dunk in a bowl of boiling water to loosen the skins and remove. Dice, removing the tough inner core. Add the tomato and cook for a couple of minutes. Dice the garlic and fish out the roasted cherry tomatoes from the oven and add them to the pan. Cook for another little while and then add the cooked vegetables. If your sauce has reduced down a little too much, either add more tomatoes and water or some unsweetened passata and season to taste. Serve it a little bit above room temperature with lots of olive and herbs.