Diana Henry pretty much summed up how I feel about autumn in this beautiful piece from last Sunday’s ‘Stella‘ magazine:

‘Autumn is my favourite time of year, not just for cooking but for walking, smelling, waking up to. Even though the season is partly about decay it also marks a new beginning (in fact, I make resolutions in September, not January). The new school year has started, the chaotic living of summer – when we never quite know what the weather will be – is over and you settle into a set timetable. There’s a new rhythm. Life slows down and you turn inwards. I’m not a hermit but I am a home-loving soul and October signals the beginning of Saturdays in the kitchen, cooking or baking.

Summer makes us yearn for big, bright flavours – flavours that attack your mouth and quench your thirst – but in autumn you want depth, complexity, flavour built from layers of ingredients and slow cooking.

There is romance in the ingredients that are around now too. I know summer strawberries and peaches have their charms, but there are many autumnal ingredients that weren’t around when I was a child that seem almost mythical to me still: bloomy figs, pumpkins so fat they could be turned into carriages, heavily scented quinces.’ 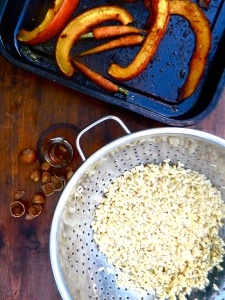 The line ‘At first you want to roast – your taste buds yearn for caramelised edges, trays of scorched pumpkin wedges and shrunken plums – then you want slow braises’ caught my eye. It was true – after a visit to the greengrocer, all I wanted to make was a salad with ‘scorched’ pumpkin wedges, pomegranate seeds, cracked fresh hazelnuts and bitter radicchio. For the first time ever I selected my pumpkin based on how small it was rather than how hefty, with the intention of using every last bit of it. I always think it’s a pity the way people put so much time and effort into choosing, buying and carving their pumpkin; they give it pride of place in their front window; they light it, take pictures of it, and then the next morning, suddenly lightless and a little wilted in the cold light of day, the whole thing goes into the compost, possibly because it was so intimidatingly large to begin with.

It’s a waste of an ingredient which is only around for a few weeks each year and can do so much more than just hold a tealight. When it’s given a little love and allowed to be the star of the show, pumpkin has a pleasant, rich flavour, and it’s actually not as sweet as you’d think – although I’d still argue that it has no place in a pie, or indeed a #PSL latte.

Seek out small pumpkins for cooking, and keep any cooked or uncooked leftovers in the fridge for later in the week. When roasted with a little oil and some spices, the pumpkin’s vivid colour and substantial texture make it perfect for building warm, layered autumnal salads upon, or for stirring into risottos and lively, garlicky pasta dishes

To make this salad, I rubbed harissa into the pumpkin slices and roasted them for about half an hour, alongside their (cleaned, salted) seeds and some tiny ‘rainbow’ carrots. I decided not to dress the salad as it has lots of flavour already, but a little olive oil with honey and apple cider vinegar could work well, as could orange juice and cumin seed.

This salad uses half a pumpkin; use the other half in a gratin, soup or curry.

1/2 a small pumpkin, plus washed seeds

2 cups of wheatberries, cooked as per packet instructions

Slice the pumpkin in half, scrape out the seeds and leave them in a bowl. Leaving the skin on, cut the pumpkin into large thick slices and rub harissa powder into the flesh. Add the whole washed carrots and season with cumin seed and salt. Turn them over in a pan of olive oil, season with the smoked salt and roast for about 30 minutes, or until the colours change and the texture is soft-ish when cut with a knife. Meanwhile, prepare the wheatberries (bulghur, freekeh or giant cous cous would work either). Wash the pumpkin seeds, pulling off the orange flesh as you go. Once clean, add about half a tablespoon of salt and a couple of cups of water. Drain, and roast in the oven for about 20 minutes. Start assembling the salad, starting with your starch at the bottom, then the pumpkin slices, then everything else, leaving the feta, pumpkin seeds and some of the pomegranate for the very top. Season and dress to taste; serve while still slightly warm.

There’s a famous expression about what it means to be tired of London but all I know is I keep finding corners I like with people I like!
The most relaxing bit of the morning slot - when everyone has to leave the water 🏊🏻‍♀️
A holliers feel
Speaking of lemons - adore this @davidshrigley addition to our kitchen from @laracls @jordanjgmoore - how does it sum us up so perfectly 😍🍋
The meat butter naan at @eatlebab is sensational!
The beautiful mouldy lemon at the Summer exhibition 🍋