It took me a week to decide whether to make it or not. I remembered the effort, the slicing, the bleached feeling your hands felt after squeezing the muslin bag of pith, the jars having to be heated in the oven, the worry that it wouldn’t set right. The ‘this is the last year I’m doing this‘.

But it never was; an afternoon of marmalade-making remained a constant in my childhood, probably at roughly the same date every year, in the same it was for my mother when she was a child (my Granny’s marmalade is famous).

I would come home from school to find my mum at the second boil stage of the process, and would hang round the kitchen watching and talking about the day: the huge jam-making pot on the hob; the extractor fan going at ‘ding-dust’, no match for the steam billowing around the room, steaming up the dark windows.

All the kit set out on the counter, archaic items that seemed from another era – muslins, aluminium funnels, wax seals, rubber bands, stern-looking tall glass jars, pretty flowered labels. Even the Seville oranges themselves – so painfully bitter, so pithy, so knobbly, even ugly – a miracle that they hadn’t been made extinct by market forces. 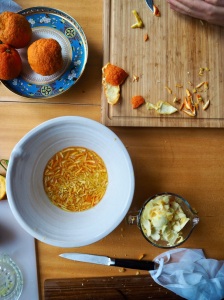 Nothing for ages: rapid boiling with no end in sight, the spoon going in and dropping the contents on a saucer, the tilt to watch for a setting that didn’t seem to be there. Some muttering, a little worry. The same every year.

Then suddenly it would be at set point, and there’d be a flurry of activity as the heated jars were filled. I’d do the business with the seals – getting the waxed paper circle the right way down in the centre of the jar and crinkling a circle of cellophane with a drop of water for the top, securing with a tight rubber band, looking for the prettiest lids and having an argument about refusing to use one that said ‘Gherkins’. 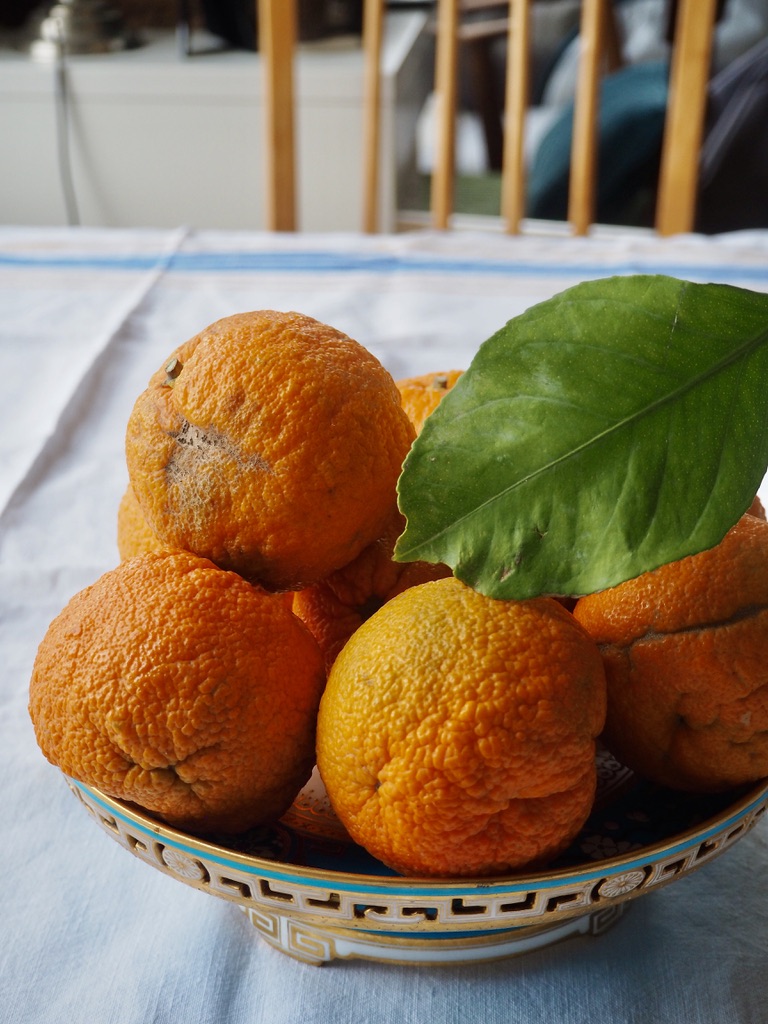 Then there was the best bit – having a cup of tea with my mum and sampling the year’s vintage, on multiple slices of hot toast, eaten by the fire. Oddly, though they must have been around too, I have no recollection of my brothers being there for any of this. It felt like a very focused, dare I say it, female thing.

What I mean by this is that no one needs marmalade, but there is a practical, measured, domestic sort of optimism about making it; about putting something inessential but good away for later, for a jar that can be pulled out at teatime when guests arrive, or brought in your hand when you’re visiting someone who you suspect will also like marmalade. The stoic magic of literally bottling sunshine at the darkest, coldest time of the year – how sensible.

There is something mindful too in the making of it. There are lots of steps that have to be followed in a sequential way; it’s slow work, but not difficult. You can sit at the table and prepare the peel alongside someone, either chatting away or listening to a podcast or just being there in the silence, trimming the orange pieces, knowing it will be nicer if you take care.

You can’t rush the boiling stages either – it takes as long as it takes and you have to just observe it closely and attentively in case it all boils over, or sets too hard, or, or, or. And in the steam of it boiling, that kitchen-filling bright citrus fragrance, it feels like the house has been purified, ready for spring.

Some notes from a not-very-well-prepared kitchen:

Wash the oranges and lemon and cut them in half across the belly, so that they can be juiced. Juice each half and transfer the juice to a large bowl. Keep the pips! Set them aside in another bowl. Using a sharp knife, carefully trim/scrape off as much of the white pith from each citrus half as you can, setting it aside alongside the pips – you’re looking for the citrus halves to be pretty much clean of the pith, so that you can see the colour of the fruit clearly from the inside. Then carefully slice the citrus halves very finely, as finely as you can really – no thicker than a matchstick is ideal. Place the fine citrus strips in the bowl alongside the juice. Add all of the pips and white pith bits to the muslin or jelly bag. Fasten tightly by tying the top of the bag, then place that in the bowl too. Add the water. If your bowl isn’t big enough for all five pints, add 3 or 4 now and then remember to add the remainder when you go to do your first boil the following day. Leave the bowl of prepared fruit overnight.

The following day, transfer the contents of the bowl to a very large pot. Place the jelly/muslin bag of pith and peel into the saucepan too (that’s important, don’t leave it out or the marmalade won’t set). Simmer gently till the peel has softened, approx 1hr 30 if your peel is very fine or 1hr 45 if it’s a little thicker. Remove the pip bag, allow it to cool  and squeeze literally every bit of pithy juice out of it by pressing the bag hard all over and squeezing (it feels gross but you need to do this bit thoroughly to get all the pectin out; the bitterness is also key for the flavour). Transfer all that juice to the pot. Don’t throw the contents of the bag away in case you need a bit more pith down the line to help it set (the pith contains pectin, which is a setting agent) but hopefully you have no problems. Place all the sugar in a baking dish and warm for a few minutes in the oven, then carefully tip into the pot. Stir until dissolved and then bring to the boil and boil very rapidly. If you are in any doubt about whether your saucepan is big enough at this stage I would 100% recommend you split the contents between two large pots, as the mix will rise high in the pot due to the sugar and could be dangerous if you’re cooking over gas in too small a pot. Keep boiling rapidly until setting point is reached. This will take about 45 to 60 mins. What this basically means is when you drop a teaspoonful of the marmalade onto a cold saucer and then wait a few mins for it to cool, it doesn’t just flow all over the saucer if you hold it at an angle (or do the wrinkle test, video here) Do this set test every 5 minutes or so. Once it gets to the point where looks a bit like a jelly on the saucer, and is not flowing at all once the saucer is tipped, take the saucepan/s off the heat. See note below if you feel yours is not getting to this point. Warm the jars in the oven at 140°c then carefully fill them with the marmalade with a jug. Once the jars have completely cooled (I popped mine in the fridge), the marmalade will have set to a reasonably thick jelly.

Note: if  you’ve already boiled it for over an hour and the marmalade just doesn’t seem to be setting, I’d advise very finely dicing a couple of small pieces of the leftover pith from the muslin bag and adding directly to the pot, along with a tablespoon more sugar. The above method should work okay though – I was very nervous that mine wouldn’t set, as while it had reached the set point while testing, it seemed very liquid when I put it into the jars, but then it actually achieved a much firmer set than I’d expected, probably because I’d boiled it SO hard because of worrying about it. So my advice is go with the set test as your key barometer and don’t try to second guess it by cooking longer.