Chances are you’ve probably seen or tasted a version of this glorious ‘No-Knead’ bread over the last few months – it’s been sweeping the internet in a cult-like manner since it made its debut in the New York Times in 2006, and it’s on the cover of BBC’s Good Food magazine this month. I’ve seen it hundreds of times on Pinterest and elsewhere around the internet in blue cast-iron pots, in yellow cast-iron pots, in orange cast-iron pots though; on trendy American websites for mums and on ancient, long since abandoned weblogs from Netscape days. It even has its own Wikipedia page. It’s like a little internet secret; a chain mail between old and new web, and it’s an absolute must try, even – or perhaps especially – if you’ve never made bread before.

The recipe comes from Jim Lahey of the Sullivan Street Bakery in NYC and is one of the most popular recipes the New York Times has ever posted. It’s a cult classic for a reason: according to Mark Bittman, the columnist who wrote the now famous article about the bread, ‘it requires no kneading. It uses no special ingredients, equipment or techniques. And it takes very little effort — only time’.

It does take quite a lot of time –  12 hours rising, to be exact – but this bizarrely lengthy rising period makes for a loaf with ‘great crumb, lightness, incredible flavour and an enviable, crackling crust’, according to Bittman. It only takes five minutes to stir together, so it’s not too arduous as long as you remember to make it the night before.

Indeed, it’s so easy to make such a perfectly beautiful rustic loaf that you feel a little bit like you’re cheating. But you’re not – this is a proper, seriously good sourdough-style bread that everyone will marvel at – and then demolish. 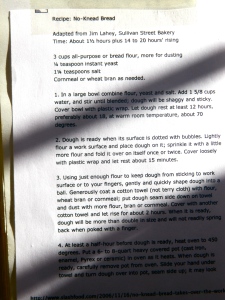 In a large bowl combine the flour, yeast and salt. Add the water, and stir until blended. The dough will be shaggy and sticky, but don’t worry. Cover the bowl with cling-film and leave to rest for at least 12 hours at room temperature.

The dough is ready when its surface is dotted with bubbles. Lightly flour a work surface and place dough on it; sprinkle it with a little more flour and fold the dough over on itself once or twice. Cover it loosely with plastic wrap and leave it to rest for about 15 minutes.

Using just enough flour to keep dough from sticking to work surface or to your fingers, gently and quickly shape dough into a ball. Generously coat a clean tea towel with flour and place the dough on top of it, sprinkling with a little more flour. Cover the dough ball with another clean tea towel and leave to rise for about an hour. When it’s ready, the dough will be have more than doubled in size.

At least half an hour before the dough is ready, heat the oven to 220ºc. Put a large cast iron, enamel, Pyrex or ceramic lidded pot into the oven to heat. It doesn’t need any oil. When the dough is ready, remove the pot from the oven. Slide your hand under the tea towel and flip the dough over into pot. Shake the pan once or twice to distribute it around the pot; it will smooth out as it bakes. Cover with the lid and bake for 30 minutes, then remove the lid and bake for another 15 to 30 minutes, until loaf is beautifully golden. Cool on a rack.

2 comments on “No-Knead Bread (AKA, Your Best Ever Loaf)”