Last weekend, I had two very different London outings, the only link between the two being the Central tube line that brought me to both locations. One trip was to a gorgeous photography studio sale hosted by American photographer (and one of my Instagram crushes) Kristin Perers in a bright, breezy flat on trendy Columbia Road, where I picked up some pretty material cuttings & old-fashioned props. The other trip was to Notting Hill Gate for the Notting Hill Farmer’s Market (which is quite near where we live and very nice indeed) and a visit to Sally Clarke’s famous shop on Campden Street.

Set up in 1989 as an offshoot to the Sally Clarke restaurant, the shop originally came into being to offer customers the same selection of breads, chocolate truffles, savoury tarts & cakes that were available in the restaurant. It eventually expanded to include pastries (the same ones eaten by the House of Commons, apparently), pâtés, pies, salads, takeaway meals & sides (including some ‘potatoes in parchment’ I noticed in the chiller cabinet, which would make even the most ordinary Monday night mince dinner fairly elegant indeed). I picked up some very good quality Neal’s Yard Greek yoghurt to have for breakfast with granola & noted the flaky, golden pastries in the window for next time, as well as Clarke’s famous Vin D’Orange – a bottled rosé & rum based punch which would make a lovely gift.

My visit to the shop was not an accident. I have long wanted to visit Sally Clarke’s restaurant, and I’m hoping it will be the first ‘fancy’ restaurant that I visit in London. Clarke has been described variously as ‘an unsung hero of British food’ & ‘a quiet revolutionary’; her food ‘a masterclass in simplicity’; her restaurant ‘quietly influential’.

Growing up in Surrey, Clarke was told what had been bought for lunch and would set about cooking something with the help of an Elizabeth David cookbook while her mother went to the garden. In the mid 1970s, she trained at the Cordon Bleu school in Paris, but as the narrative goes, was a little disappointed that she knew most of the techniques already. However, she relished the food culture of Paris – the glistening apricot pastries in shop windows & food markets of the city. After returning to London briefly to teach at the Leith’s School of Food & Wine, she left for the US in 1979 to help Michael McCarty open a restaurant in Santa Monica. It was during this period that she first visited Alice Waters’ world-renowned Chez Panisse Restaurant in California and saw her own vision for what a restaurant could be in action, describing it as her ‘touchstone & guiding light’; the place where ‘the pieces of the jigsaw came together‘. 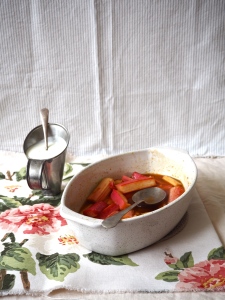 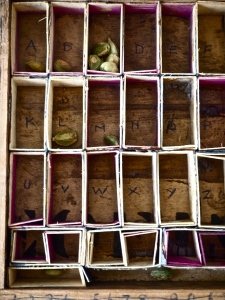 Realising however that her ‘soul was an English girl’, she returned to London and set up her restaurant in Notting Hill in 1984, offering only a set menu of simple, fuss-free, seasonally-focused plates of whatever had caught her eye at the market that morning. She noted, ‘I wanted to present a menu that was perfect for that day…. The menu would still be being tweaked & refined almost until we unlocked the doors for dinner service’. Lucian Freud ate breakfast at the restaurant every day, and often lunch too. Despite some mixed feelings in the nearby community about the logic of providing customers with such a limited offering (‘I had some rather snooty Kensington people saying – she mimics an upper-class accent – “Where’s the real menu?” ‘), the restaurant’s reputation quickly grew, and in its first year it was selected as the Good Food Guide Restaurant of the Year. 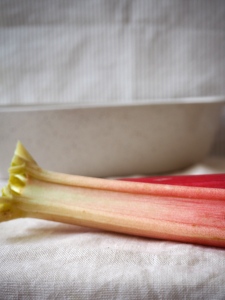 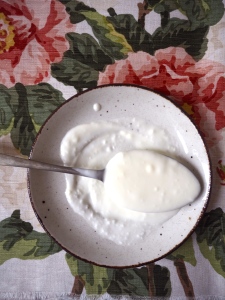 On the initial inspiration, she noted, ‘When we first opened it was more Californian. But then we moved into a more British phase, and that’s where we’ve stayed’. As Nick Lander noted in 2013, ‘the irony that the two principles that she staked her reputation on 29 years ago; a no-choice menu (albeit today described as a tasting menu) and the importance of seasonality are now so fashionable and widely accepted is not lost on Clarke’. 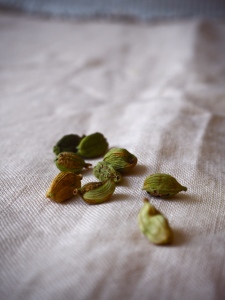 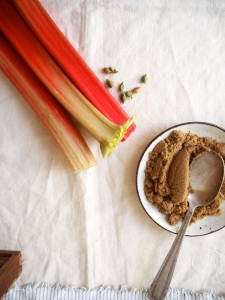 The Sally Clarke restaurant now offers a wider à la carte menu as well as the set menu, but remains known for the simplicity & quality with which it presents ingredients. Indeed, if you look at the menu online, you notice that the same clutch of special ingredients from a particular season tend to appear in a number of ways across the various courses. The descriptions are simple, and as Clarke noted in an article in Vogue about her ‘30 Ingredients’ cookbook in 2016, ‘I don’t sieve or sous-vide, nothing that tricksy. I like to roast a fish and use herbs from my mother’s garden.’ That said, Clarke’s restaurant is known for its efforts in ensuring that everything is perfect every time; a trait that Clarke says that she picked up from Alice Waters at Chez Panisse, who gets everything right ‘down to the last peppercorn‘ & is incidentally godmother to her teenage son. Her food philosophy remains to ‘keep it simple, keep it seasonal, make something which reflects the weather and the occasion’. 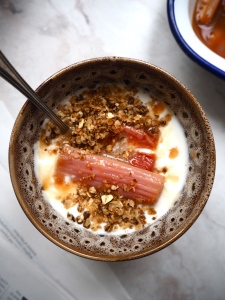 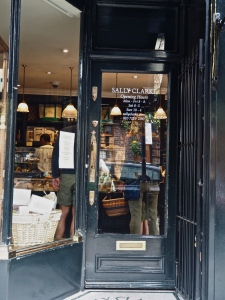 Reading the menu of the restaurant at home later (I have a tendency to seek out the monthly menus for restaurants that I have loved or am keen to visit), I noticed that the breakfast menu at Sally Clarke’s includes ‘Laiterie de la Côte Roannaise yoghurt with homemade granola & seasonal poached fruits’, so decided that I should have my yoghurt with homemade cinnamon granola and the last of the season’s pretty pink rhubarb, poached gently with cardamon seeds & orange juice for a beautiful California-meets-English countryside brunch.

Preheat your oven to 150°c. Cut the rhubarb into short batons, halving the stems also if they’re very thick and lay flat in a single layer in a baking dish. Finely grate the zest of an orange over the rhubarb. Scrape out the seeds from the vanilla pod and add to the dish along with the empty vanilla pods. Scatter the sugar over the rhubarb and pour over the juice of one of the oranges. Cover loosely with tin foil and bake for 15-20 minutes, or until tender and yielding to a spoon, but not yet falling apart. Squeeze over some more orange juice & taste the sweetness. Stir in a little more sugar if necessary while it’s still warm. Serve with Greek yoghurt & granola. 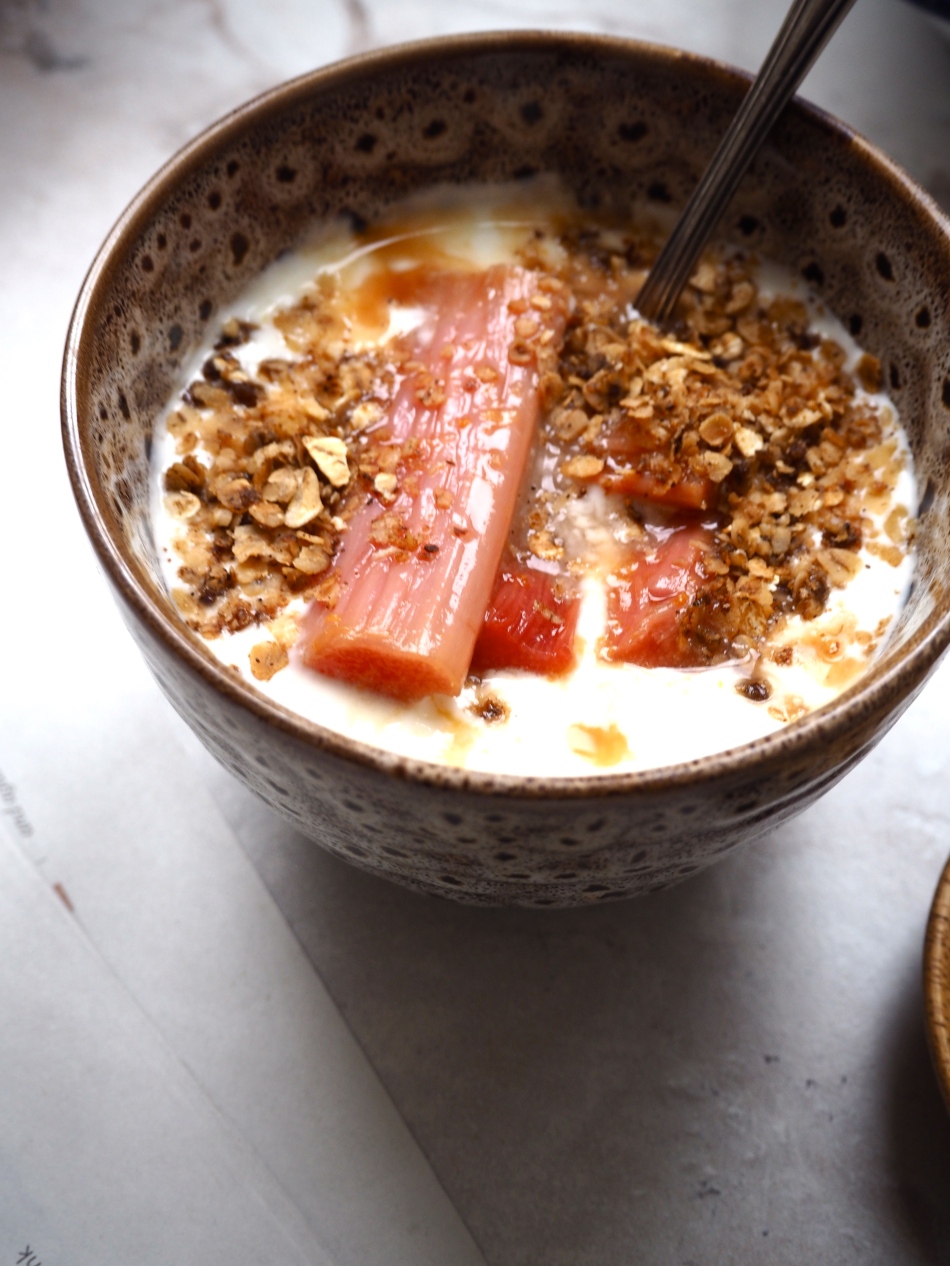 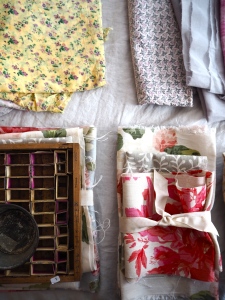 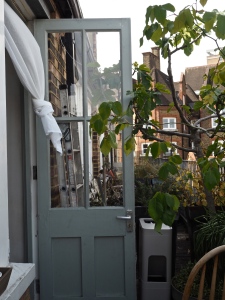 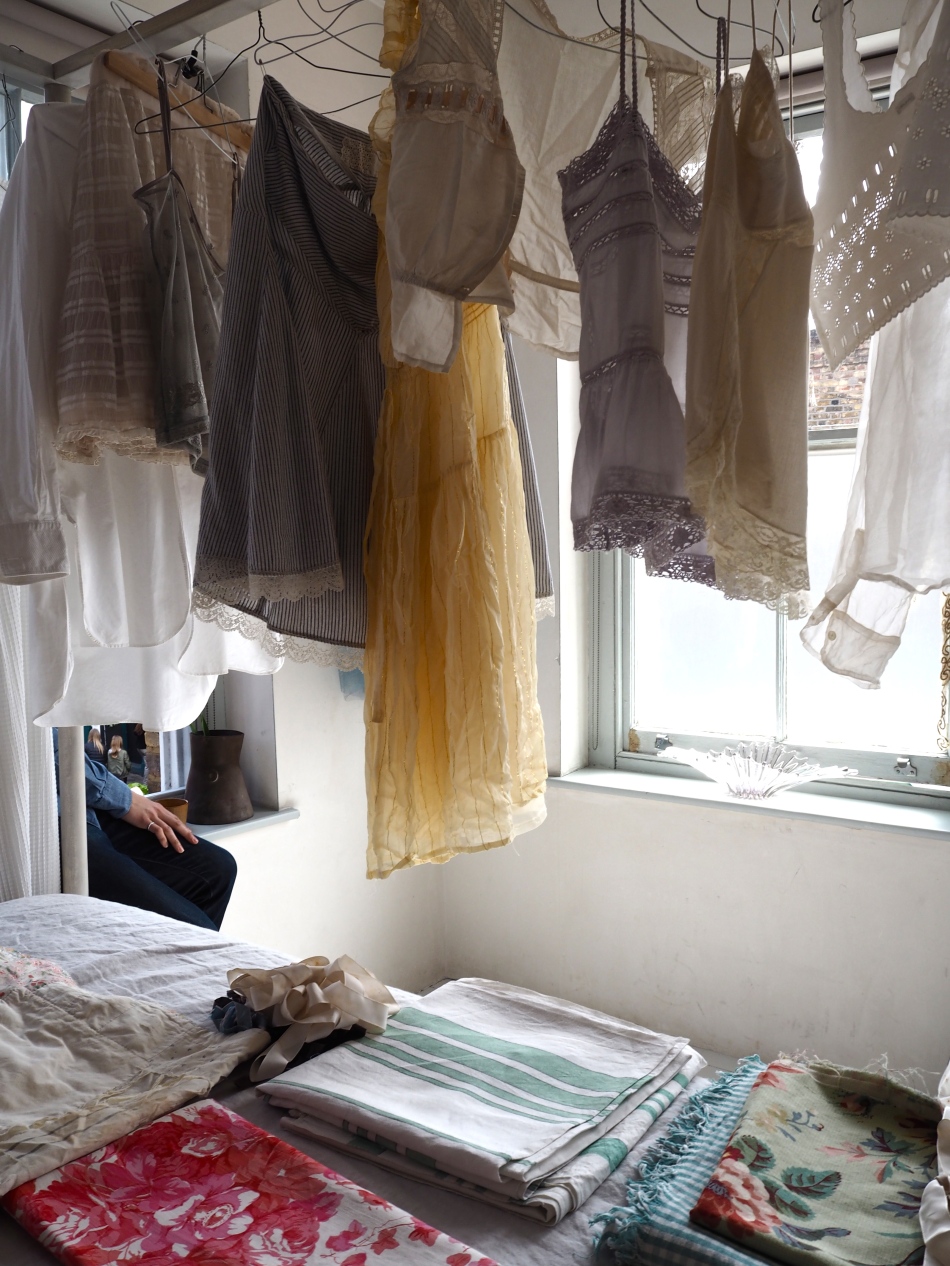