My brother got married in Canada last month, meaning several wonderful days on beautiful Manitoulin Island, six hours north of Toronto (on which more later), and two days in the city.

I wasn’t sure if I would like Toronto itself. I’d been to Québec when I was younger, which intrigued but didn’t inspire; as I could never work out the balance of the atmosphere. Montréal seemed to me to be in a constant tug of war between French and American cultures, with little room left for the Canadian personality, and I found it a little unsettling for that reason – I didn’t get any sense of the country I was in.

Ontario, however, is different. While the province does toe the official line on bi-lingualism (everyone in the airport says ‘Hellobonjour’), the French dynamic is not nearly as strong as in Québec, meaning that it’s easier to get a sense of Canada as a country and as a distinct entity in itself. Added to that is the fact that Toronto city is a total mixing pot of cultures: some 50% of its residents were born outside of Canada, meaning that any passing American influence is diluted too. In short, Toronto feels distinctly Canadian, and it is all the better for that.

It’s Canadian in the public transport (charming wood-walled streetcars ; civic-minded metro signage; state-subsidized ferry to the Islands); in the pleasant but direct way that people talk to you, and in the pockets of nature that fill the city, reminding of the expanses of forest, farmland and water that surround you, just a few miles away. 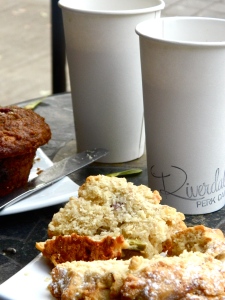 It’s Canadian in the food too. I mainlined Canadian magazines while I was away (Châtelaine was a particular favourite), and loved reading all the harvest themed features – photos of barn celebrations, for example, or entire pieces built around harvesting, displaying and cooking pumpkins, gourds and autumn fruits.

This same country feeling carried through to most of the meals we ate in the city, with roasted cauliflower appearing in three separate meals, and maple syrup popping up in dressings, ice cream flavours and in a gorgeously rustic red cabbage, kale and walnut slaw from Cumbrae, an old family butchers and newly trendy delicatessen on Queen Street East.

Since Canadian Thanksgiving is next Monday, October 12 (different from the Americans in that one too), I decided to make some dishes when I got home that reminded me of that exact feeling, that Canadian feeling. This whole roasted cauliflower and red cabbage, kale and walnut slaw would be lovely as an accompaniment to roast meat, or just served as part of a salad plate.

Trim off the leaves and pare the stalk back as tightly as possible, so that it is level with the rest of the cauliflower and cut a deep cross into it. Place the cauliflower in a deep sided casserole dish and pour the stock (mixed with the wine) around it. Cook in the oven with a lid or tin foil over it for around 20 minutes, or until the stem has become slightly tender but not soft. Drain off the liquid and cover each with around a tablespoon of olive oil and a little salt. Roast in a hot oven for another 15-20 minutes, or until the cauliflower have an even, golden colour. To serve, mix the vinegar, olive oil, parsley and garlic in a jug and top up with the hot water. Stir and pour over the cauliflower, topping with chili flakes if desired. Then either slice and serve immediately or add to salads. 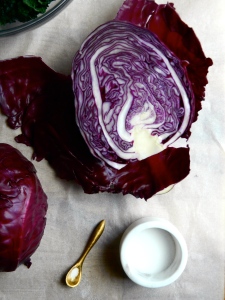 Rubbing the kale with oil and salt tenderises it and lets the slaw soak up the dressing, which is made with apple cider vinegar, buttermilk and maple syrup.

Cut the kale leaves off the stems and dice. Add to a bowl with 1/2tsp salt and 1tsp olive oil and massage for a couple of minutes. Dice the red cabbage and add it to the kale. Toast the nuts and seeds for a minute and add in while still warm. Add the blueberries and diced parsley and stir. For the dressing, mix the mustard with the salt, garlic, maple syrup and 2tbsp vinegar, and add the buttermilk. Stir the dressing into the kale and red cabbage mix. If it needs a little more tartening, add the rest of the vinegar and a good squeeze of lemon juice. Leave to sit in the  for around half an hour before eating. Keeps for three days in the fridge. 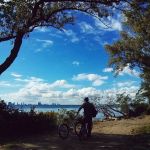 Ferry to the Islands. Then to the Far Enough Farm, cycling on rented bikes and pints beside the lake

Wasp-chased but wonderful picnic lunch in Trinity Bellwoods Park, made up of (unparalleled) rotisserie chicken and hot sauce sandwiches, kale slaw, roasted cauliflower & sweet potato salad, and heirloom tomato & feta salad; with lemonade from the 7-11 across the street and pistachio gelato for afterwards from Terroni

Browsing Trinity Bellwoods Farmer’s Market & buying magazines and dishes at the (very impressive) Indigo book & interiors store in the Eaton centre. Then whizzing out to the airport on the spacey, strangely beautiful Union Pearson Express

1 comment on “Whole Roasted Cauliflower & A Trip to Canada”

Crocs
Homemade Nando’s (or I should say *my Nando’s order*) for dinner tonight. I made a version of this 10 years ago and it literally took me two hours whereas tonight was 20 mins and then move to couch avec wine. I dunno. Maybe it gets easier. Maybe you stop sweating the details so much! Ps the tofu strips are for tomorrow, had the marinade going
Wherever I lay my 👒...
IMPORTANT INTEL: bad wine makes great frozen slushies.
Finding the quiet corners of the Heath
Thank you spring for being a ledge