Ever since I first read Elizabeth Ehrlich’s beautifully evocative & moving memoir Miriam’s Kitchen as a teenager, which is about the time the author spent learning to cook traditional Jewish food with her mother-in-law Miriam, I’ve been utterly fascinated by the varying forms of Jewish cuisine that exist around the world.

In London, as in other large cities, the beigel serves as the most prominent, city-facing emblem for the cuisine; here it is filled with salt beef to New York’s pastrami, while smoked salmon, cream cheese & pickles are common to both. New York-inspired Monty’s Deli on Hoxton Street, one of London’s most anticipated launches (or should that be lunches) was set up with crowdfunding thanks to the popularity of its dense, salt beef filled sandwiches when they were sold beside Maltby Street Market (donor names are visible on little plaques in each booth), but having visited last week with friends I can assure you that the latkes, pickles (‘noshes’) & potato salad are all very much worth trying too, as is the rugelach, and I have heard that their house-made bagels are fantastic also. Elsewhere in the city, Brick Lane is home to Beigel Bake and The Beigel Shop, both of which are equally famous for their salt beef & smoked salmon filled delights, although the debate about which establishment is better seems to be pretty fierce. 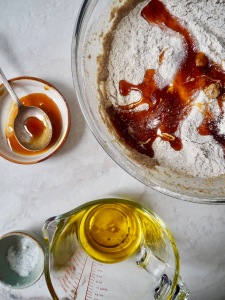 Bagels are a food that people have very strong feelings about, and from my experience, pretty much everyone relishes the opportunity to make their own just how they like them, loading them up with the preferred filling of salt beef & strong mustard or smoked salmon & cream cheese and the obligatory pickles, arguing all the while about what makes the best bagel. Accordingly, a DIY style bagel bar makes for a great food option for a fun, relaxed brunch or birthday meal. What’s more, once everything is bought or made and set out with napkins & knives, there’s not much more for the host to do, meaning they can get fully involved in proceedings (and any bagel-related debates) too. 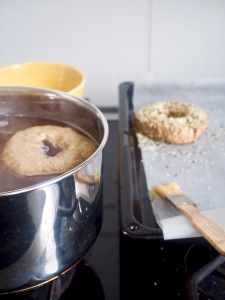 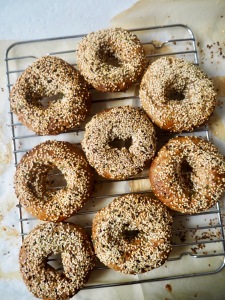 If you do decide to put on a bagel bar for your guests, the key thing to remember is that a good filled bagel is judged solely on the quality of components – it’s better to buy a smaller amount of good quality smoked salmon than lots of a cheaper, inferior product; in general I find that the more highly smoked the salmon is, the better the quality. The cream cheese should be rich & creamy – it has to be full fat at the very least – and the pickles should be the long, slightly slippery style rather than just mere gherkins – I’ve given a recipe for a homemade version below.

It goes without saying that the bagels also need to be great, so unless you have a source of great freshly baked bagels nearby (lucky, lucky you if you do), I’d advise making your own. They’re actually not too much trouble to make, and they are lovely fresh from the oven or toasted the next day. My version here is for rye bagels, but if you want a lighter style, just replace the rye flour entirely with strong white flour. 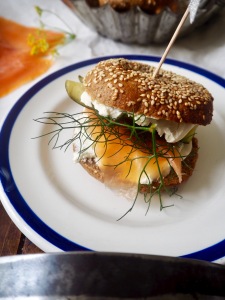 The ‘everything’ here is a New York convention meaning that every standard bagel topping – poppy seed, sesame seed, onion or garlic, caraway seed etc – is included on the top of each bagel; the Wikipedia entry to explain this is a little trippy. Boiling the bagels is what gives them their characteristically chewy texture and shiny top – the malt extract for the water bath can be bought in most health food shops.

Half a tablespoon of soft brown sugar

Place the water, strong white flour & yeast in a large bowl and stir to combine. Leave to sit for 5 minutes, so that bubbles form in the mix. Add the rye flour, sugar, salt, malt extract and oil and mix until well combined. Turn the dough out onto a floured work surface and knead for 8-10 minutes, or until smooth & elastic. Place in a lightly oiled bowl, cover with cling film and set in a warm place for an hour or until doubled in size.

Once well risen, divide the dough into 8 equal rounds and using your thumb make a small hole in the centre of each. Use your thumb and hand to tighten the circle so that there are no weak joints. Leave to rise again for 15 minutes more. Preheat your oven to 200°c. Fill a large saucepan with boiling water and the remaining malt extract and bring to a rolling boil over a high heat. Reduce the heat to a simmer and place the bagels in the water to cook for a minute, working in batches if necessary, then place on 2 lined baking sheets, brush with the beaten egg and sprinkle over the seed mix. Bake for 20-25 minutes or until beautifully golden. Serve with salt beef, pickles & mustard or smoked salmon, cream cheese & pickles. 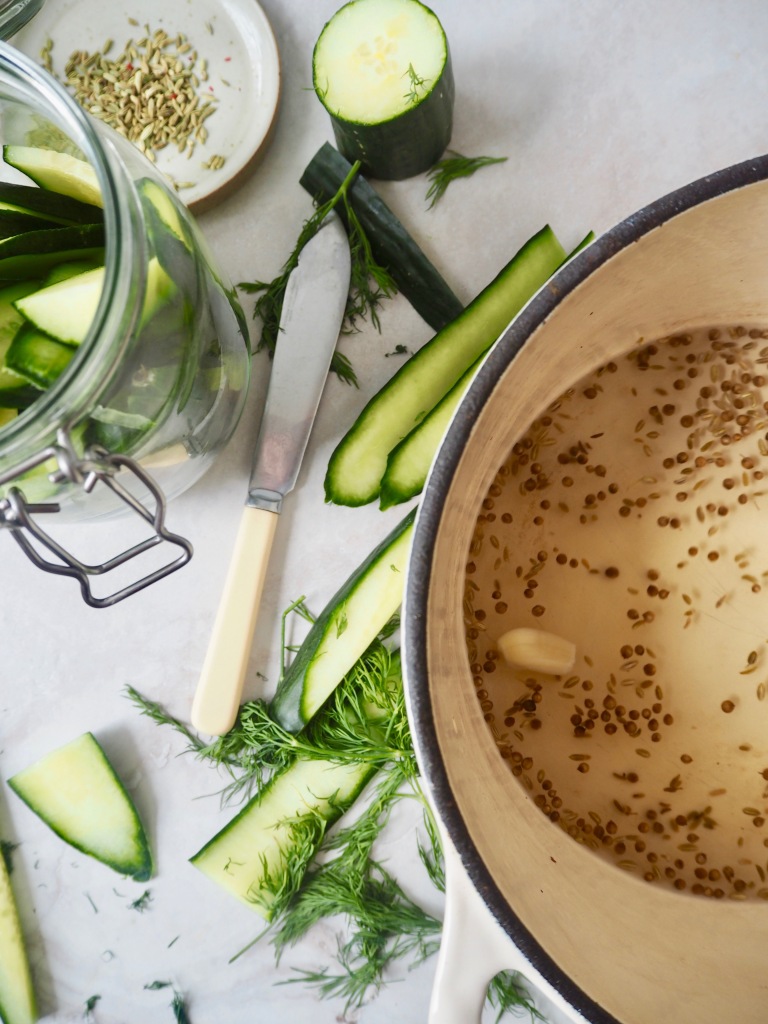 1 ridged cucumber (buy the firmest, darkest green one you can find)

Cut the cucumber into two or three depending on how big you want your pickles, then cut each of these chunks lengthways into long spears. Place in a sterilised lidded jar leaving some space at the top. Pour the water and vinegar into a saucepan and add the salt & sugar. Bring to the boil, stirring to dissolve the sugar, then take off the heat. Add the aromatics and pour over the cucumber spears. Cool, chill & cover, then refrigerate for at least an hour before serving or more if possible. These pickles will keep for several weeks in the fridge.

4 comments on “Rye Everything Bagels”

13-years-is-a-long-time 🥞🤗
Friday half days are different 😍
The Miniaturist
Kudos to @dlrcoco.ie for the cute light walk in Marlay which is on weeknights to mid Jan! Just the right amount of magic for January.
Just A Lil Stream ✨
Peri peri baked chicken casserole with macho pea rice pilaf and the best midweek veg out there, broccoli 😋