Tarte Flambée is an Alsatian delicacy: smoky bacon and slivers of white onion sprinkled over a thin, crème fraîche-covered dough base and fired into a hot, hot oven – hence the ‘flambée’. It’s something that we’ve eaten at home for years, and each time we have it, it’s completely different. Even the four I made today were totally dissimilar, as I added more of the crème fraîche mixture to the second pair. It’s always ridiculously delicious though, and having done the experiment, I can confirm that the best tarte flambée has a super thin crust, a reasonable amount of crème fraîche and a generous – very generous – handful of  bacon lardons and sliced onion. 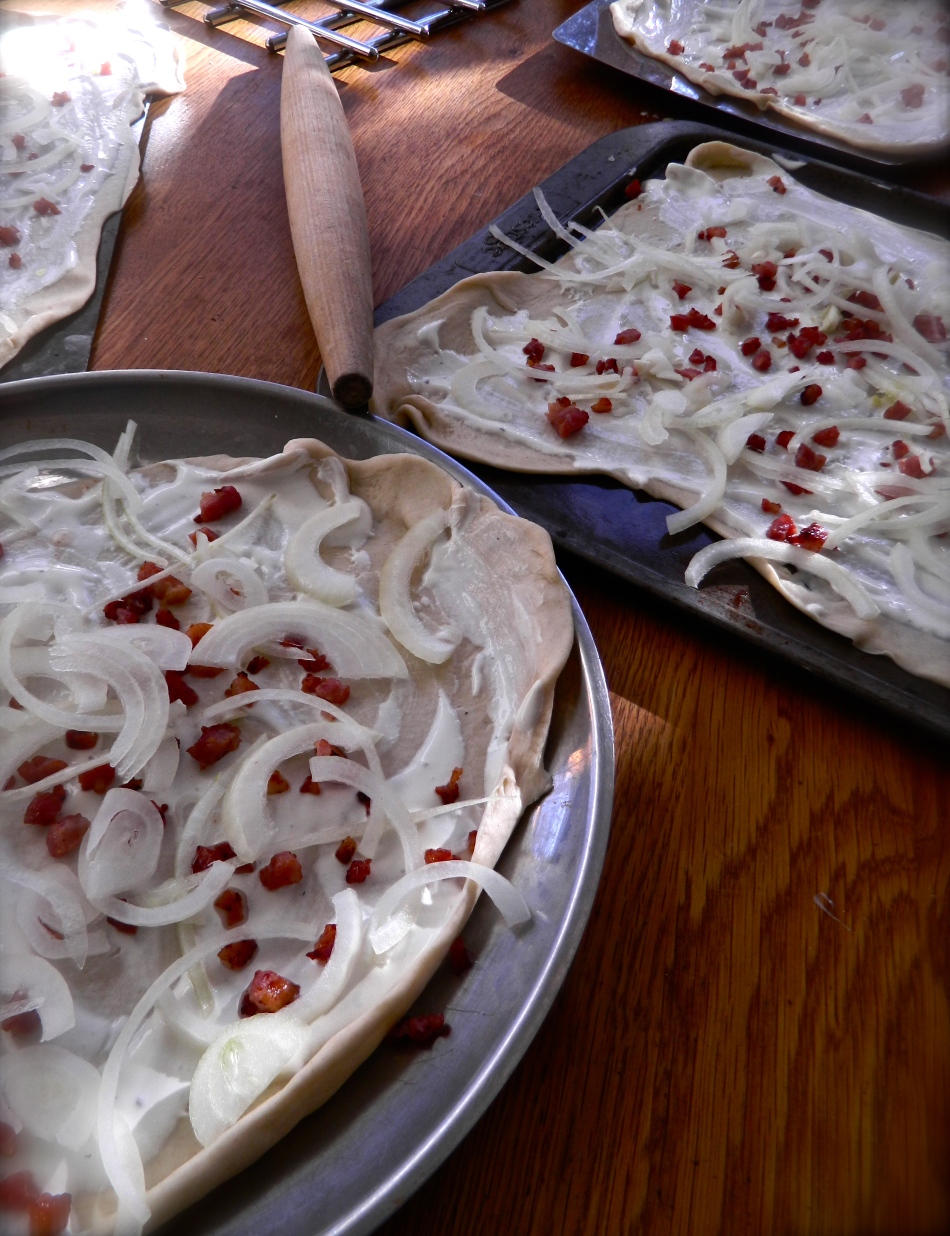 Mix the flour, sugar and salt together in a large bowl. Rub in the butter completely and then stir in the dried yeast. Add the warm water slowly, bringing the dough together in the bowl. Knead on a floured surface for eight minutes and then put it into a lightly-oiled bowl, cover and leave somewhere warm for an hour and a half, or until the dough has doubled in size. Punch down and divide into four. Oil four trays and roll the dough balls out as thinly as possible and transfer each to its respective tray.

Combine the crème fraîche and sour cream and season to taste with salt and pepper. Slice the onion very thinly and fry the bacon bits in a little oil until crisp and cooked. Spoon about three tablespoons of the sauce onto the base and sprinkle the onions and bacon on too. Bake in a very hot oven (200 degrees celsius) for about ten minutes or until it looks ready – onions and base crisp and coloured, sauce thickened and sort of ‘set’. Experiment with the first one to find your perfect crème fraîche: toppings ratio. Serve with black pepper and chopped fresh parsley, if desired.

👟
Don’t be deceived, it was punishingly cold (even to just those who dipped toes - @apeybai ; me)
The glamour, the goodness, the everyday sunshine 🌞
Stars rise.
Cute or creepy? 🧐
Hey beauty 👋 Just about to unfurl